With Amix you can have your Amiga set up in a dual-boot setup, ie. you can have both Amix and Workbench installed and you can select which one you want to boot.

With A3000 and a Bridgeboard board you can have three OS's running on one machine: Workbench/AmigaDOS, Amix and MS-DOS/Windows. Ok, only WB and Bridgeboard can run simultaneously - still not bad for early 1990's :)

It basically works like this (expecting that you start with an empty hard disk):

At this point you should have both OSs installed. Amix will still boot first as it's boot partition has higher boot priority.

You can manually boot to Workbench by going into the Early Startup Menu (hold down both mouse buttons on boot) and selecing the DH0 (or whatever your Workbench partition is called) and select Use. 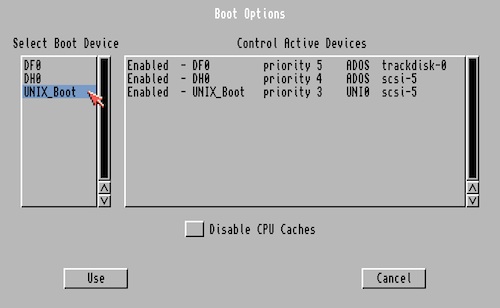 You can modify the boot priorities later if you want to change the default OS to boot. (You'll probably want to have WB boot by default as it's much faster).

Boot to Workbench and start HDToolbox. Select the Workbench or UNIX_Boot partition. 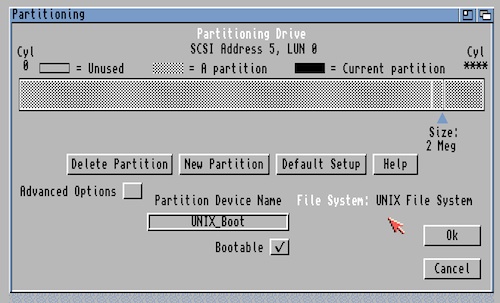 Tick 'Advanced Options' and adjust the boot priority value. Remember to press enter after entering a value! The change won't register if you just enter the value and press Ok, you need to press enter to indicate the change in value. Then press Ok and save changes to disk. 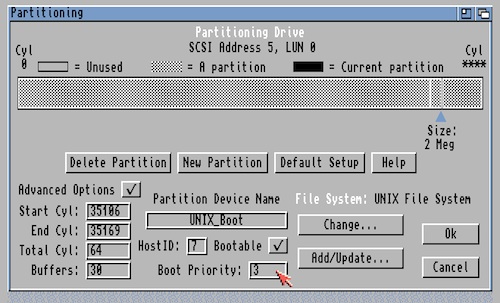