Amix was not the first time Commodore attempted to build a Unix machine. Between 1983 and 1985, Commodore prototyped a Z8000-based machine called the Commodore 900 running Mark Williams' SVR4 UNIX clone 'Coherent' (v0.7.3). It was housed a case very much ressembling the Amiga 2000's. The machine was produced in small numbers as prototypes and developer machines relased in Europe only. Approximately 500 units were produced, with very few remaining working today. The 900 was canceled amid the purchase of Amiga during 1985.

One of the first public demonstrations of Amiga Unix was at the 1988 Uniforum Conference in Dallas, TX. The prototype machine, Amiga 3500, housed in a Commodore PC60-III tower case was demonstrated at the Business Computing Show in 1991 and finally launched as the slightly re-configured Amiga 3000T in october 1991.

Commodore Amiga 3000UX - Born To Run Unix SVR4
WANTED: a higher quality scan of this - please contact us if you can provide one!

The A3000UX was also sold for universities and students. The machines were generally well-received and liked by students and staff. In some universities students were required to buy required hardware and after the end of support for Amix, later on after the demise of Commodore, universities were in serious trouble finding spares to support students who had bought Amigas. In some cases universities were forced to buy machines back from their graduated students! (Thanks to Pentad on Amiga.org forums for this info).

Amix was sold only for a couple of years and it's support was dropped already before Commodore's bankruptcy in 1994. Rumour has it that the last (and at the time only!) Amix support engineer was fired in 1993. 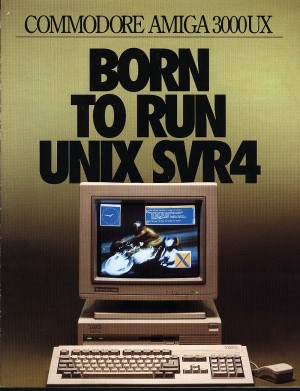 Like several other UNIX packages of the early 1990's, Amix never managed to grab wide user base and partly due to the limited hardware support. Unlike Apple's A/UX, Amix didn't have any compatiblity layer to allow running AmigaOS applications. It also didn't make use of the Amiga's graphic and sound capabilities, the parts of the hardware that made Amiga itself special at the time. Also Amix's only supported CPUs (68020/68030) were underpowered and not competetively priced compared to the competing Unix workstations. Around the same time, there was also Atari System V, which also was an SVR4 port to the Atari TT 030 Workstation. Much like Amix, it had a “brief spark of life around 1991-92 and died shortly after”.

There were talks of Sun Microsystems selling Amiga Unix machines (the prototype Amiga 3500) as a low-end Unix workstations under their brand, making Commodore their OEM manufacturer. This deal was let down by Commodore's Mehdi Ali, not once but twice and finally Sun gave up their interest.

Lead developer of Amix (/Unix SVR4 port and distribution for Amiga computers) was Michael Ditto, having the title of Unix Systems Software Architect at Commodore in 1988-1991.

The December 1990 issue of Byte magazine featured an article on the Amiga 3000UX with Amiga Unix. The Amiga is praised for it's complete package, and it is favoured above a NeXT, Mac or even a 386 PC.

At US$ 4000,- it outperformed the equally priced systems, but could not perform at the level of the “automobile priced” SPARCstation or Silicon Graphics machines.

more_than_a_toy_but_no_bargain.pdf UNIX World December 1991 Review.
“Commodore hasn't given us a convincing reason as to why it put UNIX on the Amiga”

Your Amiga UNIX System is a complete version of AT&T's UNIX System V Release 4.0 (Release 4) and provides all the features of that operating system. However, Amiga UNIX is more than just Release 4; it combines elements from several sources:

What features are unique to Amiga UNIX?

We added several public domain programs, and even documented them as primary options, because they are well known and, in some cases, more useful than the comparable Release 4 programs. The Release 4 programs still exist, work properly, and are located in the right place; we have simply added altematives, as shown in the following table.

Other public domain programs provide functions not included in standard UNIX Release 4. These programs are in the directory /usr/public/bin.

Some Amiga UNIX features are unique only because of the Amiga hardware. Functions such as formatting floppy disks and hard disk partitions, connecting a paraller printer, and setting a keyboard translation map exist in some form on many system; the specific variants for Amiga UNIX are documented in this chapter. Again, any unique features are in addition to UNIX Release 4, no AT&T, Berkeley, or XENIX functions have been removed or replaced.

Where are the Amiga UNIX programs?

Amiga programs and utilities that are not available on any other system are in the following directories:

Table 2: Some of the special Amiga UNIX commands