echo “Edit XsvgaConfig in your home directory for approriate ViewMode! Make sure /usr/bin/X11 is in your path or the X-Server could not be found.”

Check out Jeff's screen shots on amiga.org to see what it looks like. You will find them here and here.

With thanks to mackbw for describing the fix in X11R5 and OpenLook - the missing font error http://eab.abime.net/showthread.php?t=82043 -thread on English Amiga Boards.

Upgrading to X11R5 with the method described above seems to break OpenLook. It will complain about a missing font d12lucida.snf and won't start. This can be fixed by manually telling where the fonts directory is.

To change the desktop manager from tvtwm to OpenLook, change your profile's .xinitrc like this: - comment out or delete “tvtwm &” - add “xset fp+ /usr/X11R5/lib/X11/fonts/Xol” - add olwsm

Now xinit will bring up the OpenLook desktop. Go to Workspace / Properties / Color and select a color combination. For the color selection window to fit the screen, you'll need a resolution of at least 1024×768 (or use the shortcut key A to Apply the selection). 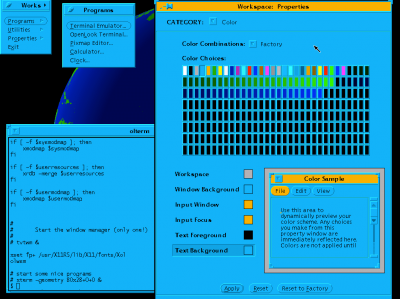